The Anterior Cruciate Ligament (ACL) is an important ligament in the knee required for stability. If the ACL is injured, then you may have problems with the knee giving way on you, or you may have feelings of the knee being unstable.

Once the ACL has been injured then there is a high chance or risk that you may damage other structures in the knee such as articular cartilage (the cartilage that forms the lining of the knee joint), which may lead to early arthritis, and / or the meniscus (the piece of cartilage that sits between the two bones).

What is the Anterior Cruciate Ligament (ACL)? 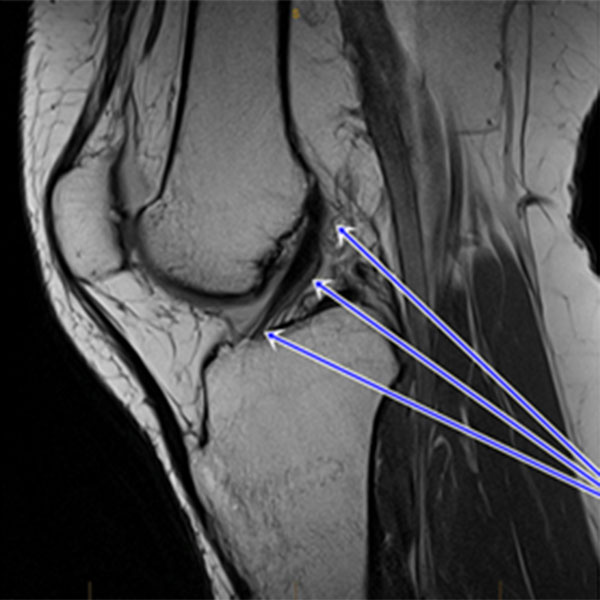 This is a MRI scan of the knee. The arrow is pointing to the anterior cruciate ligament (ACL). It runs from the back of the femur to near the front of the tibia.

How Does ACL Injury Occur

The ACL is most commonly injured whilst playing sports. It occurs when a force is applied to the knee that is greater than the ACL can handle and the ligament then ruptures.

It most commonly occurs with

In Victoria the most common sports for injury are those that involve mechanisms where the knee is placed under stress. These include:

There are other ways that you can injure your ACL and these include:

There may be feelings of:

Testing of the ACL is then performed. There are three tests that Nigel performs: 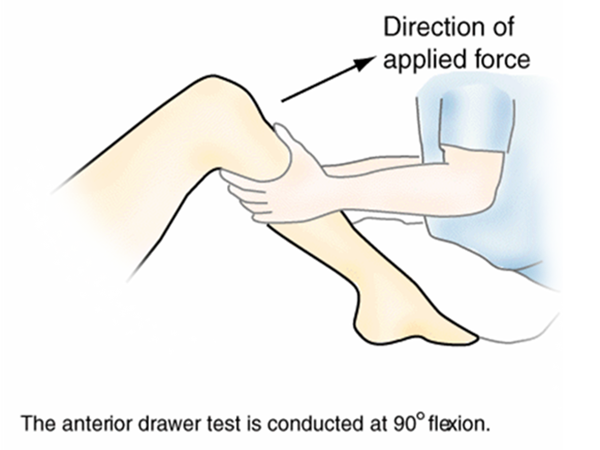 Nigel places your knee in 90° of flexion then pulls your leg forward. 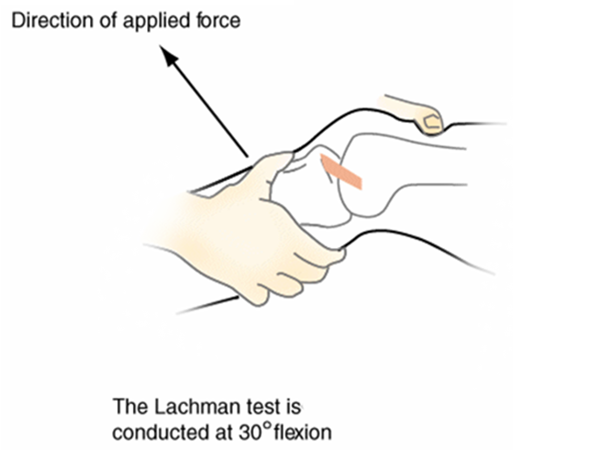 Nigel will then perform a test called the Lachman’s test. This is like the anterior drawer test but instead of the knee being bent to 90° the knee is flexed at 30°.

The final test that Nigel will do for anterior cruciate ligament rupture is a test called the pivot shift. This test cannot always be done when you see Nigel because of pain and Nigel may only be able to perform this test in the operating theatre.

Nigel will also examine the rest of your knee to make sure that there are no other injuries to other structures in the knee. If there are and you require surgery Nigel will address those injuries when he reconstructs your ACL.

Structures that could be injured

Other structures that could be injured

X-rays may be done for the patient who seeks medical attention immediately after the injury to make sure there are no fractures. MRI scanning is considered to be the investigation of choice as it provides not only information on the ACL but also other structures in the knee that cannot be seen with x-rays.

There are a number of different ways that ACL ruptures are treated initially.

Painkillers, and an anti-inflammatory should be used if able after seeking medical attention. The use of crutches should be encouraged initially. If bracing is going to be used, then a hinged knee brace should be utilised over a rigid knee brace.

Contacting a physiotherapist to start with simple quadriceps exercises and gentle range of movement is recommended. Medical advice should be obtained so that your injury is treated appropriately. This can be done by seeing your GP, sports medicine physician, or a physiotherapist.

A referral to Nigel can then be made and your knee will be assessed. If you wish to continue playing sport, have a heavy labour or high load occupation, have giving way, collapsing episodes, or instability with everyday activities then Nigel will recommend ACL reconstruction.

In a small minority of patients the ACL injured knee can undergo an intensive period of focused rehabilitation such that you may not require an ACL reconstruction.

Nigel in consultation with you, after listening to you, examining your knee, and reviewing all investigations will discuss with you the most appropriate treatment for your knee. You can ask any questions and if required a follow-up consultation can be made so that you can read all the information that is given to you.